Global Parliament of Mayors Annual Summit touches down in Bristol 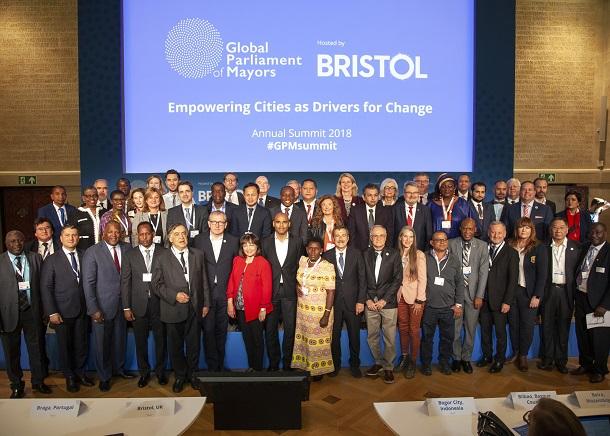 The annual summit was a chance for mayors to discuss key challenges and issues in city leadership that all participants can learn from, encouraging global governance. The GPM was founded by Dr. Benjamin Barber in 2016, who aimed to create “a world where there are no refugees or ‘others’ but only neighbours and global citizens of a peaceful, just and sustainable planet.”

This year’s summit theme was Empowering Cities as Drivers of Change, and focused on the importance of using data, knowledge and tools to overcome obstacles and drive practical action. GPM members attended panel discussions and talks, and voted on priority issues using a smartphone app – piloting an approach that, when rolled out to citizens, could herald a new era of “urban digital democracy”. Many events were covered by the world’s media.

Session topics included urban security and its links to city health, technological innovation, city networks, and women in leadership. A brand new session brought together the UK’s 10 Core Cities, the Mayor of London and the Combined Authority Mayors to meet and share information. Meanwhile, two Benjamin Barber Global Cities Awards were presented: to Mayor Zandile Gumede, of Durban, South Africa, for her community work on issues such as sanitation and human rights, and Mayor Daviz Simango, of Beira, Mozambique, for his transparency, approach to climate change, and his leadership.

The summit was also an opportunity for the visiting mayors to get to know Bristol, and the GPM programme featured several cultural events. Aerospace Bristol provided a unique setting for the opening address from Marvin Rees, as attendees sat under the Concorde fuselage. As Bristol residents, we often take our unique attractions and landmarks for granted, but mayors from the four corners of the world saw them with new eyes and helped to put Bristol on the map.

45 mayors attended the previous year’s summit in Stavanger, Norway. GPM hopes to have 1,000 members by 2030, and Bristol aims to play a key part in that growth.