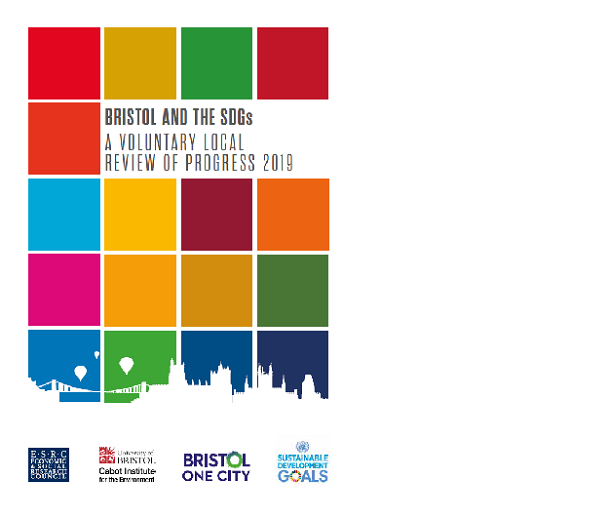 The University of Bristol has launched a new report that demonstrates Bristol’s leadership in tackling global challenges through local action.

The report summarises progress and challenges in areas ranging from education to economic growth to inequality to climate change and highlights the wide range of organisations working to make the city of Bristol, and the world, a more sustainable one.

The report measures progress using the UN Sustainable Development Goals (SDGs). Agreed at the United Nations General Assembly in 2015, they provide a framework for thinking and acting holistically to achieve sustainability. They are often referred to the ‘closest thing the world has to a strategy’ for building a more environmentally sustainable, inclusive and prosperous world.

As a city, Bristol has signed-up to the SDGs and the actions in the One City Plan have been mapped against them.

Voscur contributed to the development of the One City Plan. We believe that the SDGs can help bring cohesion across all sectors when developing policy and planning action to overcome socio-economic challenges.

The new report can help VCSE organisations to measure the city’s progress on their area of interest, as well as to help them state their case when applying for funding or communicating an issue.

The report’s findings broadly reflect increasing levels of inequality in Bristol relating to a range of issues. It seems to show a city which, despite improving in many areas, still has a lot of work to do to ensure that the benefits of progress touch everyone’s lives.

The SDGs that are notable in reflecting this include:

SDG 2 – No hunger: Some areas of Bristol experience high levels of food insecurity and the percentage of underweight children has risen. Several large partnership-based initiatives have been launched to address these challenges.

SDG 3 – Good health and wellbeing: Mortality rates from cardiovascular disease and from preventable forms of non-communicable diseases have declined, but the life expectancy gap between the most deprived and least deprived has increased since 2012.

SDG 5 – Gender equality: The proportion of female elected officials has been rising in Bristol, but the gender pay gap in the city has not been reduced and rates of domestic abuse and sexual violence have risen.

SDG 10 – Reduced inequalities: Bristol’s Gini coefficient is slightly below the national average, but the gap in earnings between the top 10% and bottom 10% has been rising. Reported incidents of racial discrimination and harassment have also risen sharply.

SDG 11 – Sustainable cities and communities: The ratio of income to house prices has increased significantly, and homelessness has risen since 2010. Public transport use and air pollution have both improved, but perceptions of safety have worsened.

SDG 16 – Peace, justice and strong institutions: Bristol is a safe city with strong judicial institutions, but violent crime and domestic abuse rates have risen in step with national trends. Reports of modern slavery have increased. There has been an encouraging reduction in young offending.

For more information on the SDGs, visit the University of Bristol’s Bristol and the Sustainable Development Goals webpage.