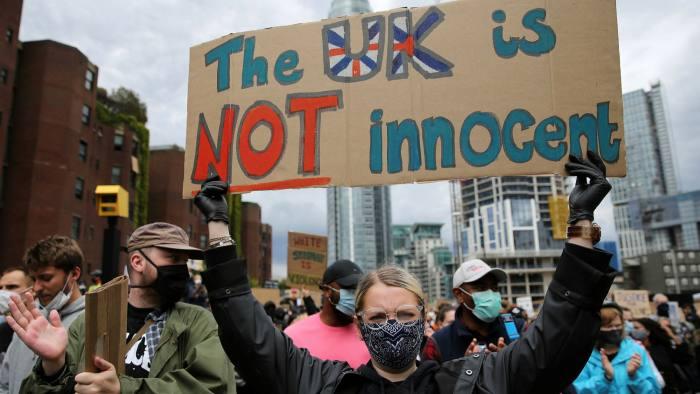 Following the murder of George Floyd whilst in police custody in the United States and Black Lives Matter demonstrations in the UK and around the world, UK Prime Minister Boris Johnson set up the Commission on Race and Ethnic Disparities, promising the Commission would set out a “new positive agenda for change”.

The Commission, led by educational consultant Tony Sewell and overseen by Number 10 policy adviser Munira Mirza, consists of ten members “drawn from a variety of fields spanning science, education, economics, broadcasting, medicine, and policing. And, with one exception, all from ethnic minority backgrounds.”

The result was the publication of the Commission’s report, which includes the commissioners’ views on racism and racial disparity in the UK today, as well as chapters and recommendations on education and training; employment fairness at work, and enterprise; crime and policing; and health. A summary of the report is available here.

Since publication, the Commission’s report has faced strong and far-reaching criticism. Within a week, a letter signed by more than 21,000 people – including the former chair of the government’s own race disparity unit advisory group Lord Simon Woolley and Voscur CEO Sandra Meadows – was presented to 10 Downing Street, urging the government to reject the report and its findings. The letter calls on the Prime Minister to instead implement the recommendations of the long-standing Macpherson, Lammy, Marmot and Williams reviews into racism.

Baroness Doreen Lawrence OBE, mother of murdered Black teenager Stephen Lawrence, said that she believes the report “has pushed [the fight against] racism back 20 years or more”. The report has been denounced by human rights specialists at the United Nations, who say that the report is an attempt to “normalise white supremacy”, and encourages the UK government to reject the report’s findings.

Bristol’s Black South West Network describes the report as “full of cherrypicked data and ill-founded conclusions” that overall represents a significant shift backwards. BSWN called the report “an opportunity to truly grapple with the issues surrounding inequality and the racial tenets of that”, concluding that this opportunity has been missed.

SARI (Stand Against Racism and Inequality), the Bristol-based organisation that provides support for victims of hate crime, said that the report “is inflammatory and likely to give free license to some with racist views as it ‘victim blames’ and puts far too much responsibility on Black and minority ethnic communities for racial inequality and disparity”.

Here we outline some of the reasons why Voscur, as an organisation, supports the views of our members and partners who have responded in this way, as they actively drive for racial justice and equity.

Firstly, personnel. It should not be forgotten that Munira Mirza, who handpicked the 10 commissioners, has previously said that institutional racism is a “perception rather than a reality”, while the Prime Minister, her ultimate boss, has a record of using racist language including calling Black people ‘piccaninnies’ with ‘watermelon smiles’. Ten years ago, Commission head Tony Sewell said that he was “tired of the flawed research that always positions Black and Asian people as victims of institutional racism”.

While the members of the Commission are mainly from ethnic minority backgrounds, there has been criticism that many of them have previously rejected the existence of institutional racism in the UK. The concern is that these views may have then been subjectively carried forward into this work, resulting in a lack of objectivity in approach and an imbalance of viewpoints within the Commission.

SARI points to the lack of engagement with highly thought of and qualified race equality experts and organisations such as the Runnymede Trust, CharitySoWhite, Operation Black Vote, Tell Mama, Sir Simon Woolley and Baroness McGregor-Smith, saying that “while the commissioners may have expertise in their fields, they aren’t race equality experts”.

Added to this, the government has been accused of rewriting sections of the report to fit its own narrative.

With a report that was commissioned by, overseen and led by individuals who have previously clearly articulated their disbelief in the existence of institutional racism, it very much feels as though the conclusion to this report was written before any research or assessment of data was completed.

There have been many written critiques of the report since publication, two of note are by Halima Begum (CEO of the Runnymede Trust) and Patrick Vernon (Windrush campaigner).

Locally, SARI comments that the report “clumsily differentiates the outcomes between different ethnic groups with some inaccurate analysis of the reasons for these differences – this could pitch communities against each other or lead to targeting and increased prejudice towards those groups already facing the worst disadvantage.”

At the national level, the government’s own race disparity audit describes how Black, Asian and other ethnic communities face disparities in housing, in mental health, in prisons, in education and in access to employment. Yet, notably, the report fails to acknowledge that any of these disparities are due to people having been failed by the system they live within. Instead, the report points purely to individual actions being the cause of individual woes, rather than taking a good hard look at a prejudiced and discriminatory system that results in many people from Black, Asian and other ethnic backgrounds being unable to fulfil their ambitions and potential.

We support SARI’s view that the report trivialises the daily racist micro-aggressions that are experienced by many in Black, Asian and other ethnic communities. We find it deeply worrying when the report says that “society has ‘defined racism down’ to encompass attitudes and behaviours that would not have been considered racist in the past. This is one reason for the rising sensitivity, the language of micro-aggressions and safety, and stretching the meaning of racism without objective data to support it.”

Evidence from SARI also shows that racially-motivated hate crime has increased steadily year on year, where the number of crimes recorded by Avon and Somerset police have more than doubled in the past ten years from 35,845 in 2012/13 to 78,991 in 2018/19. More recently, SARI found that attacks on Asians in Bristol increased as a result of the impact of the Coronavirus pandemic, with similar experiences reported by Black people because of a perceived association with George Floyd and the Black Lives Matter movement, evidence that has been backed up by the government’s own statistics.

The report also includes comparisons with other national statistics, citing figures that just 21% Black British people had reported harassment in the past five years, when compared with 51% of Black Irish or 48% of Black Germans. Indeed, the Commission was confident enough in its findings to say “the success of much of the ethnic minority population in education and, to a lesser extent, the economy, should be regarded as a model for other white-majority countries”; even going as far as to suggest that the UK could be “a beacon to the rest of Europe and the world”.

In describing the growth of equality, diversity and inclusion training within workplaces, the report once again appears to put the blame on the individuals themselves rather than looking at the system they work within: “Diversity training should not be focused on avoiding and policing misunderstandings or conflict, but on helping people build relationships and collaborate despite inevitable disagreements, and on leveraging divergent perspectives in order to advance collective goals.” In our view this, again, amounts to a rejection of the imperative to educate and inform, particularly with regards to the nuances within racial equality and a denial of lived experience of people from Black, Asian and other ethnic communities. This is not aligned with practices relating to the Equality Act 2010.

The 2018 Windrush scandal was mentioned just twice in this report; to this Patrick Vernon says “I can see why they haven’t included it. If they had focused on the scandal they would have had to admit that there was a systematic, structural failure in how the Home Office targeted the Windrush generation”, a structural failure that has had a hugely negative impact on many impacted. In 2018 the independent investigation into the causes of the Windrush scandal found that “the Home Office had displayed ‘institutional ignorance and thoughtlessness’ on race issues, ‘consistent with some elements of institutional racism”. Wendy Williams, the report’s author, concluded that “there seems to be a misconception that racism is confined to decisions made with racist motivations... This is a misunderstanding of both the law and racism generally.” Yet less than three years after the Windrush Lessons Learned Review, the new report boldly states that: “Put simply, we no longer see a Britain where the system is deliberately rigged against ethnic minorities.”

We are sorry to report that the above examples barely scratch the surface of just how wide of the mark the Commission’s findings are. As SARI says: “It is a deeply flawed report and very offensive in the way it has played down the multi-generational trauma caused by the Transatlantic Slave Trade and the abuse of the Windrush generations as well as other very real experiences of people of colour in the UK.”

We stand with those calling for the implementation of the recommendations of multiple rigorous investigations conducted over the last 20 years. Failure to do so equates to a dereliction of the government’s duty to act in ways that ensures safety, protection and equity for people from Black, Asian and other ethnic communities.

What does this mean for the volunteering, community and social enterprise sector?

This report has undoubtedly caused confusion and anguish for many working and volunteering in the VCSE sector.

Of concern for the sector is how the Commission’s report influences funders and commissioners. The fact that Blondell Cluff, Chair of the National Lottery Community Fund, was part of the Commission’s team is worrying not least because, as Akiko Hart reports, as one of the UK’s wealthiest funders, NLCF representation on the Commission “sends an erroneous message to other grant making trusts and foundations who might be looking for leadership in this area, that the lived experience of people from racialised communities is not borne out by the evidence”, as the report “side lines and denigrates the collective knowledge and scholarship built in this area”.

Over the past year there have been a number of cases of institutional racism being exposed within the sector. At the same time, national and local organisations such as CharitySoWhite, BeOnBoard and others are working hard to improve equality, diversity and inclusion within the sector, from board level to service delivery staff.

We are pleased that in Bristol there are a number of programmes that are working to change the landscape (for example, City Funds and the Local Access Programme). Within this is a challenge to funders, commissioners and investors to understand how and where systemic inequality sits and to eradicate anything that presents a barrier to funding for those experiencing discrimination or disadvantage.

At Voscur, we will continue our work in the city with partners such as Black South West Network, BeOnBoard, the Commission on Race Equality and others to ensure that Bristol becomes a true beacon of equality, challenging the ‘systems’ that continue to disproportionately exclude those from Black, Asian and other ethnic communities.

We support the drive for greater inclusion and diversity within the sector which includes a look at our own organisation, taking action to ensure our Board and staff team is representative of those we serve. We have been working closely with the city’s Strategic Race Equality Group to develop a mechanism of support for groups in this area and to establish base-line data in relation to race equality within our sector. There will be more news on this later in the year.