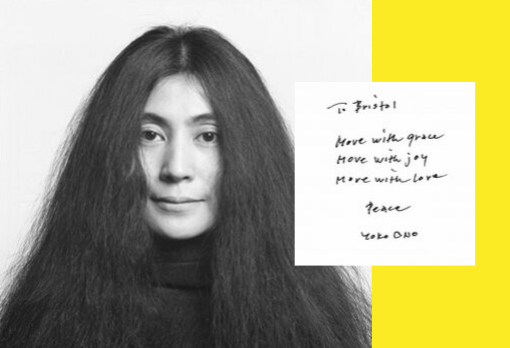 A new exhibition at Bristol’s Georgian House Museum by world-famous artist Yoko Ono will also include statements from 115 service users of Next Link and Safe Link, to raise awareness of domestic violence and sexual abuse.

The statements form part of an installation called Arising, which focuses on the abuse of women – a theme that Yoko Ono has often addressed. The exhibition, called Interventions/2, is Yoko Ono’s first solo show in Bristol, and it will open on Saturday 28 September 2019.

Next Link and Safe Link are part of the Missing Link charity, working with survivors of sexual violence and domestic violence in Bristol and South Gloucestershire. Next Link is a domestic violence support service offering safe houses, resettlement help, outreach, and crisis response; it supported 2,313 women and 964 children from 2017-18. Safe Link works with women, men and children who have survived rape or sexual abuse; it supported 1,057 victims from 2017-18.

Voscur spoke to Carol Metters MBE, Chief Executive of Missing Link and Safe Link, who described the service users’ role in the exhibition.

How did your organisation get involved with this project?

We were approached by Bristol Museum and the curator, Jimmy Galvin, to collaborate. I’d seen the Arising installation before, and I know Yoko is keen to give a voice to abuse victims.

Some of the statements are just one line, and others are a side of A4 paper. Most are hand-written. Every woman who gave a statement also had a picture taken of their eyes, so they’re not recognisable, but you see them individually.

The statements are pegged on lines and they’re in the kitchen of the Georgian House, which resonates because we’re talking about domestic abuse and how it’s hidden behind closed doors.

This installation could really help raise awareness of domestic and sexual violence. What do you hope people take away from it?

The victims wanted to take part so that they give something back, and hopefully prevent abuse happening to other people. It gives them a voice, and the museum staff could see straight away that it has an impact.

You don’t really get victims’ voices in the art world – it’s not an environment we’d normally reach – so this is a good collaboration for us.

We also reflect on racial discrimination, which is particularly important in the museum because it was once a slave trader’s house.

I read that you’ll also have resources from Next Link and Safe Link in place for people who need them at the exhibition.

Yes - we’ve trained the museum staff on how to respond if people visiting the exhibition feel it triggers something and they need to talk– it may be a visitor’s own experience of domestic violence or abuse, or something a friend is going through. We also provide cards and contact details at the museum, with a direct line to reach our services.

Interventions/2 runs from Saturday 28 September - Tuesday 31 December 2019.
The Georgian House Museum is open Saturday-Tuesday, 11am-4pm.
Please note there is no step-free access at this venue.

If you have been affected by the issues raised in this article and need support, please contact: